The video exhibition The First Decade comprises seven works, five of which are displayed on monitors, and two projected. Creating a prominent soundscape of different rhythms and sounds, all seven videos are heard over loudspeakers. The five works on monitors also have individual sets of headphones, enabling the public to immerse themselves in the world of each video, with the opportunity to sit down in front of each video. These five monitors are placed two or three abreast inside the box walls, creating a new spatial situation along with the other two videos that are projected outside the box walls. 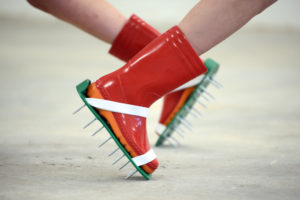